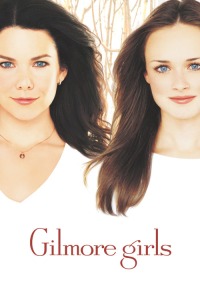 I have been revisiting one of my favourite shows recently, since it’s been available on netflix: Gilmore Girls. You’re right, it’s not my usual science fiction or crime drama fare, but it has excellent writing, witty dialogue and some brilliant casting.

One of the things that makes a show is excellent casting – when the cast has chemistry that adds that extra spark and drama to the show: it’s the glue that makes it WORK. Gilmore girls is a prime example of this. Not only that, it’s a show about a single mother and her daughter crammed with literary references. What’s not to love? Throw in some kooky small-town dynamics, offbeat characters and some really good plot lines and voila, one of my favourite shows.

I love how the show catches the small-town flavour so well, without making it cheesy. Everyone knows everyone and the sense of community is almost a character in itself. I love how the high society social constraints are viewed through an absurdist lens, too: Rory’s experience with the debutante ball, for instance, or Lorelai’s run -in with Emily’s DAR meetings or the Cotillion.

And can I just gush for a moment about how many female characters there are on this show who just plain rock? First of all, we have Lorelai, who forged her own life out of sheer determination and raised her daughter to be a fair and hard working individual. She came from money, but she decided it was better to do things on her own rather than bend to the will of others. She flies in the face of the stereotype single mother on welfare and I love her for it. In fact she’s working towards her dream of opening her own inn with the fabulous and scattered Sookie. She’s sarcastic and witty, but she never fails to support the people in her life who are important to her. Even though she struggles to have a relationship with her parents, she doesn’t stand in the way of them having one with her daughter. Even when she reaches her goal, she doesn’t let her commitment to the inn override her relationships.

Then there’s Rory, who I have heard some complain about as the ‘special snowflake’ daughter – but I think even with her privilege and her Ivy-league aspirations, she breaks the stereotype too. She’s determined to go to Harvard, but not just because Lorelai wants her to, she has a goal and knows, because of her mom, that she has to work to get it. And she’s far from perfect – her relationships with boys are just as awkward and painful as anyone else  – even when she tries to do the right thing. When she finally goes to university, she has the same determination her mother had, to do things on her own terms.

But it doesn’t stop here! Lane Kim! Can I just say that in a mostly white cast, it was refreshing to have Rory’s best friend be a Korean girl? And not just any Korean girl with the (almost) stereotypical tiger mom, but one who is a music fiend of epic proportions and who also, like Rory and Lorelai, has a goal she will work for against all odds? And she’s not just a sidekick, token person of colour here either, she’s got real agency and that’s also great. So often you get shows that are hooked on one or two man characters and you don’t get to learn anything about the other characters. Not so with this show!

I also love cantankerous Luke Danes. Everyone in this show loves to flout social norms and societal expectations and Luke isn’t an exception. Instead of running his dad’s hardware store, he turns it into a diner. He doesn’t agree with anything just because, in fact he’s always the voice of reasonable objection. Or not. Sometimes he just objects to get Taylor’s goat, which seems to be a town sport. And what makes Luke better is the relationship he has with Lorelai. I love it, they’re best friends and neither of them is even totally aware of it for the first few seasons and it just keeps getting better and better. He is always there for her and for Rory in a way that Christopher wasn’t when times were hard and I think it’s really interesting how that triangle develops in the last season. (Why did you cancel it! oh why!). Luke and Christopher bring out the worst in each other.

I love them all: Miss Patty, the dance teacher who’s unapologetic about her sex life and desires, Babette with her cat obsession and her cool cat husband, Sookie and Jackson, Taylor, Kirk and the mildly psychotic Paris… I could babble on, but I shall not.

Oh and let’s not forget Michele with his accent and his incomprehensible love of his Chow Chows. He’s so acerbic and catty and sometimes I feel like poor Michele while I am at work:

So I haven’t been reading that much of late – mostly because the books I’ve picked up recently have just not been awesome enough to hold my attention – but being the way I am I feel obligated do trudge through til the end even if I’m not all that into the story. This means I can get stuck on a book for far longer than need be.

Until this one. In desperation I asked the girl at the bookstore to recommend me something and she handed me this little gem. Short review: I couldn’t put it down.

I fear that anyone younger than my mid thirties self might not enjoy it as much as I did since it’s so stuffed with 80’s trivia and video game nerdery as it is, but being an 80’s child is not a requirement to get the story. It’s tightly written, with excellent pacing which more than I can say for the last few books I’ve read. It combines high adventure (it is a quest tale, after all) with science fiction seamlessly (massive Japanese mecha, 8-bit video games, wizards and starships in all shapes and sizes!). There was a bit of a lack in some of the character development of characters outside of the narrator, but I don’t think it detracted from the story. Honestly that wasn’t why I was reading – his friends were background, filler, mirrors.

So for a novel that lives up to the promise on it’s back cover, Ready Player One by Ernest Cline is one you should probably pick up. And if you need some nostalgic nerdporn, definitely pick it up!