Last night I read the entire Go Ask Alice which has been presented as the diary of a real teenager in the early 70’s who got into drugs and spiraled out of control to the point that she died two weeks after the last entry in the diary. I found some of it a little hard to believe, but I’m not sure if it’s because of the generation gap, or because of my skepticism in regards to its authorship. (There are those who think it was penned by a woman who has written several other ‘cautionary tales’ of the same nature.) However, I couldn’t put it down: I had it propped behind my keyboard while I was watching anime. I spent a good hour before I passed out deconstructing the thing in my head. For one, it was too focused to have been a real diary and the emphasis was misplaced on her drug experiences. Any other fifteen year old would have spent a good few pages bitching about being stood up for a date rather than a single paragraph entry. At least if my own diary from that age is any indication!

Anyway, I stayed up way too late last night with that book and my apples and milk and sugar, but I wanted to finish it before I started another book. Throat feels a bit better after having otherwise babied myself yesterday.

[edit] And now for something completely different!

I must admit, I have avoided the quagmire of politics for two reasons: 1) I honestly don’t know enough about the whole thing to have a solid opinion about it, or to defend said opinion if it came down to a debate. 2) because when people talk about politics (and religion) they often end up trying to convince me their way of thinking is right. Or if not right, then at least the only way to think.

Reason 2 is the kind of conversation I enjoy when it comes to religion because I have spent countless hours reading and learning about any kind of religion, cult, faith and/or belief that comes my way. I am informed, and very, very curious.

So, when someone called me a leftist a while ago, I was momentarily speechless and mumbled something about really not knowing one way or the other to agree or not. And because I did not really know even what the term meant beyond the vaguest idea, I decided I’d better start reading. (The surest way to get me going is to point out to me that I don’t know something.) I voted in the last election based purely on the platform the premiers-to-be were putting forth, the one that seemed to best fit with my wishes for the future, even though I knew that none of them would be able to deliver 100% of what they promised. So I cast my vote without really knowing where each party stood on this political spectrum thing. Having read more now, I can honestly say he was probably right, I’m more left than not, but I haven’t read enough to root myself firmly in either place merely because idealism and reality don’t often go hand in hand.

Someone suggested that I just write whatever came to mind, you know, a stream of consciousness thing, in order to get all the crap out of my head. Maybe loosen up the writing muscles. So I did. I really didn’t expect 4 pages of crap in 11pt font, but there you go. I seem to have a lot in my brain… surprise, surprise.

After that I went for a walk to the beach. Lovely, lovely beach with the sun on the water, the smell of salt in my nose – gods it felt good. I lay down on one of the beached logs, closed my eyes and just listened for a while. The rush and hiss of the waves sucking at rocks, shaping the ridges of sand and tossing seaweed and flotsam up across the tide line. Endless. Relentless. Persistent. What stone can withstand water?

I’m slightly sunburned now, but I feel better. On my way back I happened on a garage sale where they were selling books for 25 cents. A dollar seventy-five later and I have the collected works of Allen Ginsberg 1947-1980, a medical dictionary of sorts, a selection of writings of Lucretius in hardcover, a copy of The Life of Pi by Yan Martel and three James Bond novels by the infamous Ian Fleming. They are 2-4 in the series but I could not resist, having seen all the movies repeatedly. Not bad for less than 2 dollars, I don’t think. I’m most excited about the Ginsberg since I’ve wanted a copy of the entirety of ‘Howl’ for some time that wasn’t e-text. And here it is – among all sorts of other gems the man produced, as crass as some of them are. Crass, I say that like it’s a bad thing. The man was breaking the rules of poetry and I can’t help admiring him for that.

Now I just have to find a decent copy of e.e. cummings and William Blake, among others.

Going to attempt some more writing perhaps… unless the phone rings again. *argh* I just wish I could remember where on earth I put the scribbles and notes for Dragonbreed. I suppose I had better ask St. Anthony for a hand, eh? He’s a sight better than Murphy all right. 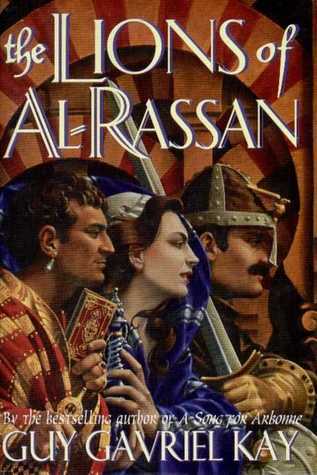 I loved this book. I read it in a week over the holidays as a book that I didn’t have to think about, but I found myself thinking anyway. What’s interesting about Kay is that he writes demi-historical fiction. I say this because this novel reminded me strongly of Spain during the Islamic occupation. There are people in the novel who represent the Spanish Catholics, the Islamic warriors, and the Jewish people. A very complex and beautiful story, no less true or difficult for it’s fictional nature however.