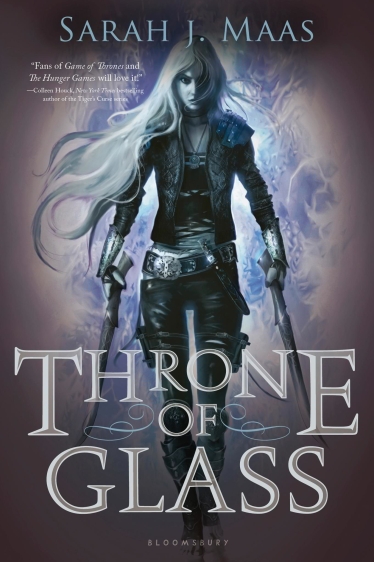 I wanted very much to love this book as much as all the 5 star ratings on goodreads said I should, but I didn’t. And it’s not that the story isn’t good, or that the characters aren’t complex, but I felt like this needed one more serious edit before it went to print. There are holes in the narrative – on one occasion Celaena puts on a coat and then looks for her coat. More than once she doesn’t wonder something that I do, that she should if she is as good an assassin as she is supposed to be – and it seems this happens simply for the purpose of the plot. This girl is supposedly the most feared assassin in the known realms and we have no idea why. No stories of her accomplishments and certainly no proof at these trials, of which we only see a few. She doesn’t even see the wisdom of playing it safe until the end so that she doesn’t draw the attention of the real competition and only concedes because these two boys tell her it’s a good idea. If she were as clever and deadly as the story keeps saying she is, we should see some evidence of this. [If you don’t want spoilers, continue no further!] Why does she save Nox? She’s not ruthless, that’s for sure and she would need some measure of that to be a killer of her calibre. And the all-of-a-sudden introduction of the fey queen made my writer self groan out loud. It’s all well and good to have mystical help – I am cool with that, but it was so sudden and so cryptic and Celaena, I suppose in a manner unique to teenagers, doesn’t wonder about the things she’s told and doesn’t even think about the queen again until the final confrontation with Cain. And for all her research into Wyrdmarks, Celeana never seems to get anywhere, we don’t even know what she does find or if it might be relevant until so much later. Celaena’s sudden suspicion of Nehemia is based on one encounter and she doesn’t seem to struggle enough with it since, until then it seemed she had accepted Nehemia as a friend. Which is bollocks because she never confides any of her findings with any of the people she is supposed to cherish: Dorian, Chaol, or Nehemia – all of whom would probably fall all over themselves to help her. This is important because, from what we’re told, she doesn’t trust easily – and yet she knows Nehemia knows about the Wyrdmarks and she’s supposed to be clever enough to wheedle information she needs. (But she trusts Chaol and Dorian almost instantly! What?) And all the while she never asks questions about the ring on Cain’s hand, or Kaltain’s treachery, or even why the King was absent for most of the tests that were supposedly set up for him to choose his Champion. I think someone wonders that at some point, but it was as though it was thrown in as an afterthought. Maas is good with dialogue, especially when she’s working with the love triangle, but she needs to have Celaena engage with more people than that and show us more about Celeana to make us believe what she keeps telling us about her.

I love that there is more young adult fiction out there with strong and complex female protagonists and I applaud this book’s premise. I just wish that Maas had given Celeana more agency, more brains and just a tad less moon-eyes.

Goodreads reviews tell me that the second book is better, and since I got them both at the same time, I shall endeavour to read the second one to see if it is in fact any better.

So: read this book if you want some brain fluff on a windy fall evening with your tea, but this is nowhere near the calibre of Game of Thrones as someone claimed on some board somewhere. I am enamoured of the idea of a lady assassin and I hope that Sarah J Maas can take some constructive criticism on her next foray into fiction!

Don’t read this book if you dislike the use of deus ex machina.