I was feeling nostalgic and reading my posts from my last trip and realized it’s all backwards, so here: 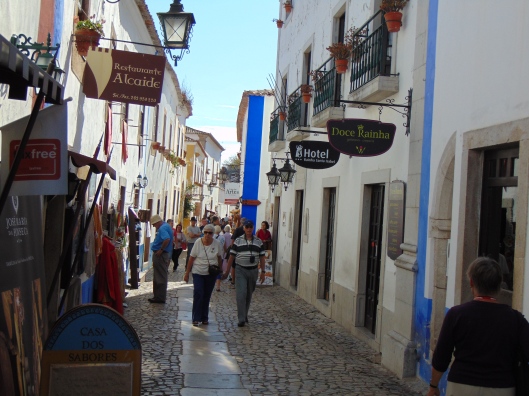 exploring, history, Lisbon, Portugal, the world is beautiful, travel, travel writing, Yes I did these things

Lisbon, ot Lisboa (leesh-bow-ah), as it is called by the Portuguese, is a very old an very beautiful city. Our plan for our first full day in Portugal was to explore the Alfama, which is the highest – and the oldest – part of the city.

In 1755, there was a very large earthquake and what the shaking did not destroy, was further demolished by a tidal wave. Lisbon, shaped as it is like a little pocket between two high points, managed to escape lot of devastation, except the lower part, the Baixa (Bai-sha). This lower part was completely redesigned and rebuilt under the direction of  one Marquis de Pombal. This is the part with the beautiful wide avenues, the large marble and sandstone tiled squares and the more modern shopping districts. Alfama rises on one side and the barrio alto on the other. Alfama features the São Jorge Castle at the top and the Tejo river below.

The last time we were here, we took Tram 23, just to say that we had done so, but – remembering our jerky and crowded experience last time, we opted to walk to the Castelo instead. 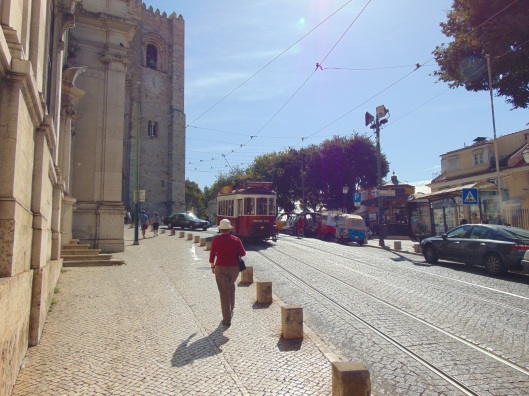 I love how this image shows the old and the modern together.

We stopped at an overlook and took some of my more favourite photos of Lisbon. Along this little stretch were also a bunch of street artists painting scenes and images from around Lisbon for the tourists. I fell in love with one  – but id not buy it. Somehow I thought that it was too early to start buying souvenirs. (Don’t worry, I went back for it!)

Lisbon from the Alfama District, overlooking the Tejo, Sept 2015

The Castelo, which sits on what seems to be the highest point in the city, has been the site of a fort, or castle since the 3rd century, BC and I can see why. From its battlements you can see miles inland and miles out to sea. We spent most of the day inside ,poking around the ruins, walking along the walls and just admiring the view from next to the cannons that point out over the entrance to the harbour. 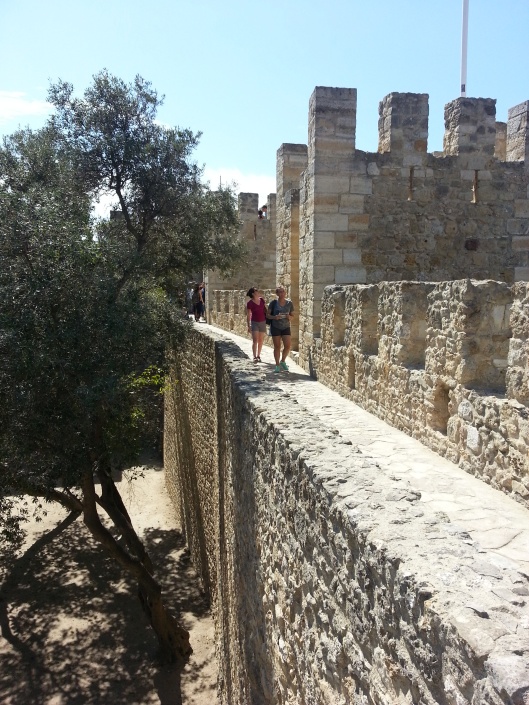 After this, we took a suggestion from Rick Steves and found ourselves a little snack bar. It’s a neat idea, you can go in, buy a drink and a little hand made munchie for one or two Euros My favourite was the little shrimp cake. We also shared a cod cake (a perennial favourite around here, I’m told) and a little chicken pie, each nearly 2 or 3 bites big. The Portuguese seem to love to talk and eat, so this arrangement seems to work quite well – and if you look there are many of these little hole-in-the-wall type places serving these little mini-tastes of local cuisine. I rather liked it, because it was wonderful to observe a community in action. It was apparent to me that there were several regulars in the bar while we ate and two of the women was intent on discussing the merits of the soap opera that was playing on the TV.

Our plan for the afternoon was to visit the Fado Museum, but on our way down the hill, we realized that it was closed – but that it would be open tomorrow, which we also had to ourselves. So we wandered the streets only half-aimlessly. We went back to the street vendor where I purchased my little drawing. I impulse-bought a fan because it was 32°  and because it matched my dress. It was just a cheap thing, but it served it’s purpose. Then we hunted for the Pingo Doce grocery store we had seen the day before in our post-flight haze.

We bought some wine (€2!), some cheese, coconut yoghurt (yum) and some perfect granny smith apples for dinner.